…musings from the mind of a budding journalist.
5 Comments

Posted by Sammi on March 29, 2009 in International, Random Musings

The other night I couldn’t sleep so I decided to look through my scrapbook from Europe (which I finally put together when I got to IF). As I looked through it, I realized that exactly one year ago, I would’ve just returned from my three-month adventure. So, in honor of my anniversary, here are some highlights from my trip abroad (I’m going to steer away from anything museum-related since I’ve got a ton):

I was part of a study abroad group in Roma and on the first day of class, we visited the Roman Forum. I would have to say this was definitely one of my favorite ruins to visit. Just look at it. Is there any question as to why?

This is from that first day.

As you can see it was a gorgeous day. Unfortunately when we returned weeks later, it was raining like no other and we got drenched. I’m just glad I took my pictures on a good day. I would have been beyond pissed if I didn’t. 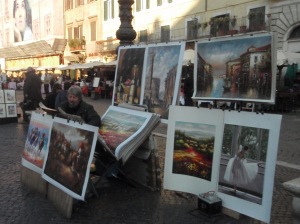 The piazza less than a block away from my apartment.

My roommates and I were lucky enough to live in a great apartment that was a ten-minute walk to our school and less than a block away from Piazza Navona.

This square was definitely one of the most interesting I came across.

With several restaurants and a toy store on the perimeter, artists selling their paintings, drawings or  jewelry (I got a wire necklace that spelled out “Sammi”), musicians performing their songs and other street performers sometimes doing nothing more than just standing there, there was something for everybody.

Not even a foreign language will squelch my inner bookworm.

It didn’t take long for me to discover the Italian equivalent to Barnes and Noble or Borders.

La Feltrinelli sells books, music and movies. And when I walked in, I was beyond thrilled. It honestly didn’t matter that most materials were in Italian. I didn’t care. Just the atmosphere was enough to make me happy.

I quite literally visited every bookstore I came across, every chance I got. No matter what country I was in, if a store sold books, I was there.

I visited the English section a couple times and even though I didn’t actually buy any books, it was still great. Occasionally, I grabbed a book and just sat down and read in the store–which now that I think of it, is exactly what I do here.

Oh well, I guess old habits die hard. But really, what are you going to do? There’s nothing wrong with that.

Apparently, I've still got it in me.

For one Saturday, our professor and his wife took us to Sperlonga, a beach town just south of Roma.

It was a sunny day but because it was in the middle of January, almost everything was closed due to the off-season.

While there weren’t any shops for us to visit, we had the whole beach to ourselves. After missing the first bus back to the train station (or whatever it was we took, I don’t remember), we had a good hour or so to hang out on the beach.

We played around and eventually I got up to my old tricks again and started flipping around like I used to back in my gym days. It was reassuring to find out I could still do some things.

Jeff just hanging out at a Chinese restaurant.

This is Jeff Arctico. He belongs to my friend Chrissy. He came with us to Firenze, where we found a Chinese restaurant.

By that point, it had been a month that I’d gone without Asian food. That may not sound like a long time but when you go from eating rice every day to not eating it at all, a month is a long time.

When we found the restaurant, I was so excited. The food was actually better than some places I’d eaten in Chinatown back home. Either that, or I’d just gone so long without that anything would’ve tasted good to me. Anyway, once our food arrived I set to work and just stopped talking and focused solely on my food. My friends were kind enough to not bother me too much.

Jenny, Ellen and me in Venezia during Carnival.

Venezia has always been somewhere I wanted to visit. There is just something about an entire city that gets around either by foot or boat that I find fascinating.

Almost my entire class traveled to Venezia during Carnival. It was amazing. The costumes and the masks were beautiful. They were so extravagant and detailed.

What visit to Paris is complete without a trip up the Eiffel Tower?

Valentine’s Day weekend, I visited Paris. Unlike most of my other trips, I traveled alone.

One of my mom’s friends growing up lived just outside of the city. It was about a 30 minute train ride from where they lived to Paris.

It was interesting dealing with the language issues but we managed by speaking three different languages. I spoke Khmer with my mom’s friend and her husband and English with their daughter and she spoke French with her parents.

They took me site seeing on one of the days but I also had one whole day to do some site seeing on my own. I visited the Louvre museum and got my picture taken with the Mona Lisa, walked along the Champs– Élysées and went up the Eiffel Tower.

Being in Paris wasn’t as romantic as it could’ve been since it was the middle of winter and  I was on my own but it was a great trip nonetheless. I definitely want to go back with friends (or my boyfriend/fiance/husband) when the weather is warmer.

When I visited Cinque Terre, my sister told me I had to visit this small restaurant run by these Sicilian twins.

The brothers at Il Pirata delle 5 Terre in Vernazza made the best breakfast pastries. And on top of that, they were nice as can be.

As you can see behind us, there are tons of pictures and postcards on the wall of the restaurant. These are from people around the world who have visited the tiny restaurant. 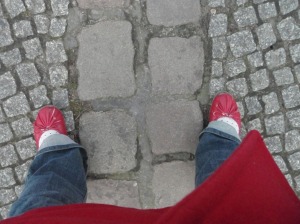 One foot in West Germany and one in East Germany. Standing in two places at once. Now all I need is my own Landon Carter.

One of my favorite places to visit was–surprisingly–Berlin. I wasn’t planning on going initially but my friends were going and they invited me along.

I honestly had no expectations for the trip. I didn’t know much about Germany besides the basic World War II history.

We went on a free walking tour of the city and I ended up learning a lot about Germany and its history.

We saw pieces of the Berlin Wall and throughout the city was a brick line indicating where the wall once stood. Straddling that line reminded me of “A Walk to Remember” when Landon brought Jamie to the state line to check off one of the items on her life’s to-do list. *Sigh*

At the end of the quarter, we went to the Capri as a class. We more or less had the whole hotel to ourselves.

It was a lot of fun even though we were rained in for a big chunk of the time. I think we had maybe one day total of no rain.

One night, we had a toga party and as you can see, pretty much everybody participated.

It was fun hanging out with and getting to know some of my classmates that I didn’t really talk to during the quarter.

During my first week of spring break, I visited England by myself. I stayed in London most of the time but I also spent one night in Manchester to see The Feeling in concert.

After spending three months in Italia, it was both a good and bad thing to be in London.

For one, it was a lot easier figuring my way around and asking for directions since I spoke the language. I also found  Waterstones–the UK’s biggest bookstore–and a Borders so that was exciting. And discovering Platform 9 3/4 at King’s Cross absolutely thrilled the Potterphile in me.

But the weather, city and entire environment reminded me so much of home. It felt like I was in Seattle except everything was on the other side of the street. I was so close to going home but I wasn’t home yet that I got pretty homesick–especially since I was on my own. There were a few times when I would start crying for no reason.

The view of Barcelona from Park Güell.

Barcelona was definitely another favorite of mine. This was the last stop on my trip before heading back to Roma and then home.

I was reunited with my friends and spent a there. It was the end of March by that point so the weather had definitely improved.

We visited different Gaudi museums and parks. Park Güell was amazing with its architecture. There were these buildings that reminded me of giant gingerbread houses.

Okay, well that was a really long post. I didn’t expect myself to go on so much but I’m not surprised. Given my penchant for wordiness and the fact that this was a three-month trip.

I’m not sure when my next big trip will be but I am traveling to Cozumel, Mexico in May. My sister’s best friend is getting married and for some reason, I was invited. But whatever. I’m not going to give up a perfectly good excuse to go to Mexico. So, there you go.

And more specifically about…

When I said it…

What others have said in response…

What I’m saying in short form…

What other people have to say…

Remember, I said it first

This work is licensed under a Creative Commons Attribution-Noncommercial 3.0 United States License.